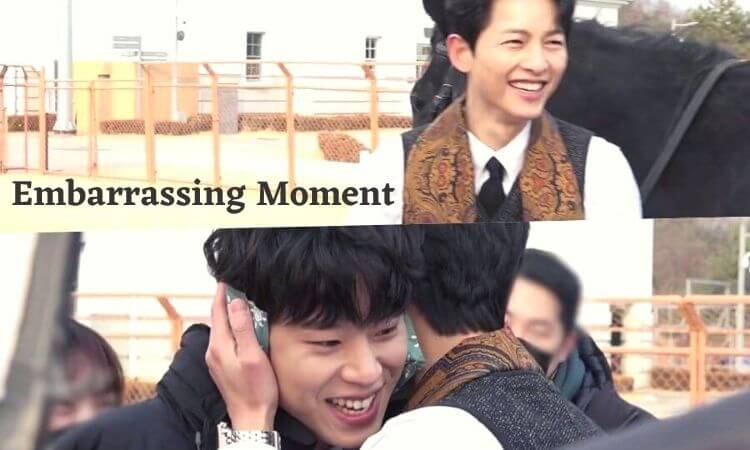 tvN has released the behind-the-scenes video of episodes 7 and 8 of  Kdrama Vincenzo. Behind-the-scenes videos show funny moments from the set, such as actress Jeon Yeo Bin trying to find the right position to sleep in and the crew poking good-natured fun at her for trying to look pretty while sleeping. Song Joong Ki plays a soccer game with some kids in a field.

While Taecyeon impresses the crew with how he can gulp down an entire water bottle in a single take. Later, Taecyeon and Kwak Dong Yeon play some table football games with each other. Taecyeon said that I feel like people who are really good at this can move the handles really fast.

There was a great focus on the special appearance from Kim Sung Cheol, who also starred with Song Joong Ki in Arthdal Chronicles. Kim Sung Cheol plays Hwang Min Sung character, the CEO of a bank whom Song Joong Ki’s character. While Mr. Vincenzo Cassano trying to attempt to seduce in order to derail the bank’s deal with Babel Group.

Kim Sung Cheol is a more shy actor than Song Joong when it comes to filming flirtatious scenes in Vincenzo. He gets very embarrassed when Song Joong brings his cheeks together to share the warmth of his heart. Song Joong Ki allows permission to Kim Sung Cheol before filming a touchy-feely scene and goes for it, but adds at the end, I’m not touching because I like to touch.

In the end, the entire cast and crew won’t let Jeon Yeo Bin live as she comments. That’s so pretty while monitoring her hug scene with Song Joong Ki and a crew member asks, Are you calling yourself pretty? She replied, “Everything is pretty.