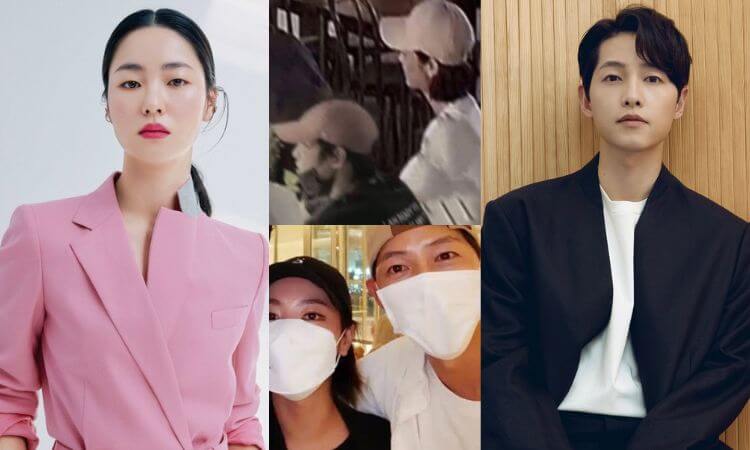 Song Joong Ki and Jeon Yeo-been Are Reportedly Dating: Here’s the Detail. The first season of the South Korean drama Vincenzo came to a close on May 2 of this year, and fans are now eagerly awaiting confirmation of the show’s renewal for a second season. Their request is for Song Joong Ki and Jeon Yeo Been to appear on-screen together once more in the future. As a result of the plot depicting a passionate kissing sequence between Song Joong Ki and Jeon Yeo Been’s characters Vincenzo Cassano and Hong Cha Young, demand for Vincenzo Season 2 is at an all-time high at the moment. The fact that fans want to see Vincenzo back on the big screen with Season 2 is being driven by yet another compelling argument.

Vincenzo wrap up party after 2 yrs 🤧

The reason for this is that many internet users have the impression that Song Joong Ki and Jeon Yeo Been are dating. Since they worked on the same production as Vincenzo, both of the performers have been the subject of relationship rumors. They were recently seen together at a location, which raises questions about the possibility of a love connection between the two of them.

Song Joong Ki and Jeon Yeo-been Spotted on a Date

Song Joong Ki and Jeon Yeo Been have been the subject of relationship speculation ever since they worked together on the set of Vincenzo. These two have regularly demonstrated how close they are to one another by publicly supporting each other’s endeavors, sharing endearing moments on the red carpet and during award ceremonies, and other similar activities.

Recent sightings of Song Joong Ki and Jeon Yeo Bin in the same location have fueled rumors that the two are seeing each other and may even be dating. The pair sat very near to one another and even donned hats that were pretty similar to one another and seemed like they should have been worn together. This photograph with a lot of blurs has received a lot of attention on social media. After being separated from Song Hye Kyo for two years, some internet users speculate that Song Joong Ki may have moved on from his ex-girlfriend and is now dating someone else. 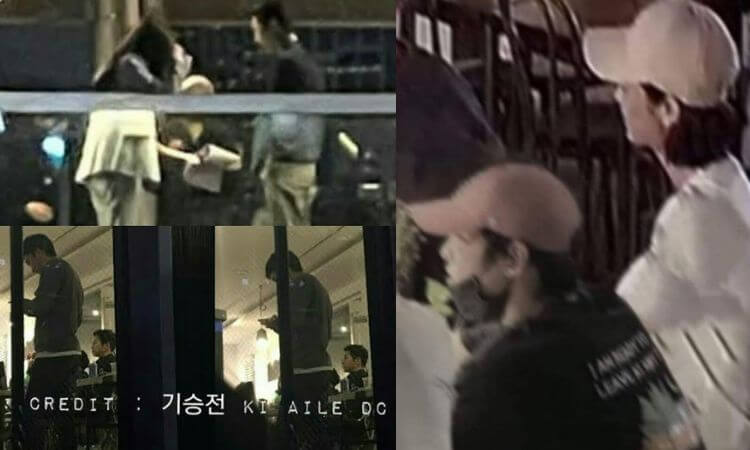 The authenticity of their connection is called into question as a result of this among online users.

Despite this, the photo reignited the allegations that Vincenzo and Vincenzo are dating, which then became the topic of conversation on the internet. Both Song Joong Ki and Jeon Yeo Bin have remained silent on the dating rumors that have been making the rounds for a considerable amount of time.

I CAN ONLY IMAGINE

People in Vincenzo thought that Song Joong Ki and Jeon Yeo Been were dating because of their sizzling on-screen chemistry together in the role of Vincenzo.

The pair also had a spectacular contact directly on the platform during the most recent Blue Dragon Awards presentation.

It seems as though Song Joong Ki and Jeon Yeo Bin are living in their own world and are oblivious to the people around them. 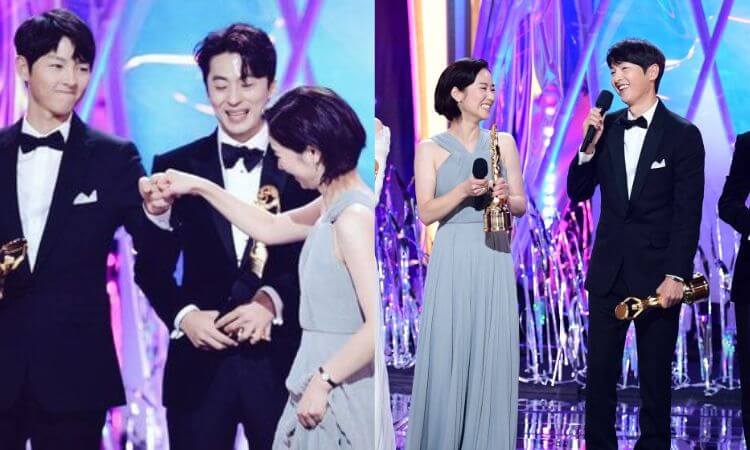 Song Hye Kyo’s ex-husband continued to lean over to the side of his “rumored lover” despite the fact that they were required to sit apart.

In the film Vincenzo, the two actors portray the roles of criminal partners-in-crime Vincenzo Cassano and Hong Cha Young (their onscreen coupling is nicknamed CenCha, by the way), who also have a romantic component. While Vincenzo maintains his cool and composure under pressure, Cha Young’s manic enthusiasm is contagious. In a nutshell, it’s a marriage made in the mafia’s version of paradise! They have the type of relationship where you can find comfort in one other, which is one of the things that I appreciate best about them working together: nothing is forced or rushed.

It is the ideal illustration of how one does not necessarily need to say “I love you” in order to demonstrate affection for another person.

Song Joong Ki and Jeon Yeo Been Support Each Other

Before the world premiere of Vincenzo, Joong Ki praised Beenie as “an actress whose acting is not only pleasant to watch but a sort of acting that hasn’t been seen before.” Beenie’s performance was hailed as “a style of acting that hasn’t been seen before.” He continued by saying that she is the type of spouse that provides him with a great deal of motivation. As for our lady, she shared with us that from the moment they started working together, she felt completely comfortable putting her faith in Joong Ki. 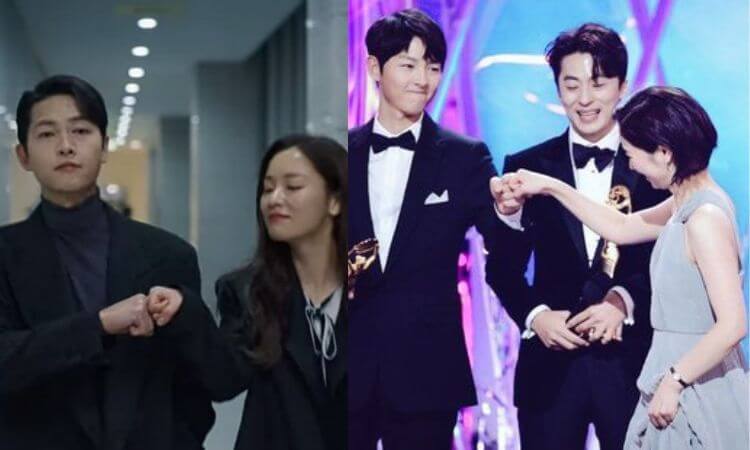 Not much to report; I’m just dropping in to let you know that the two of them joined Instagram on different days. 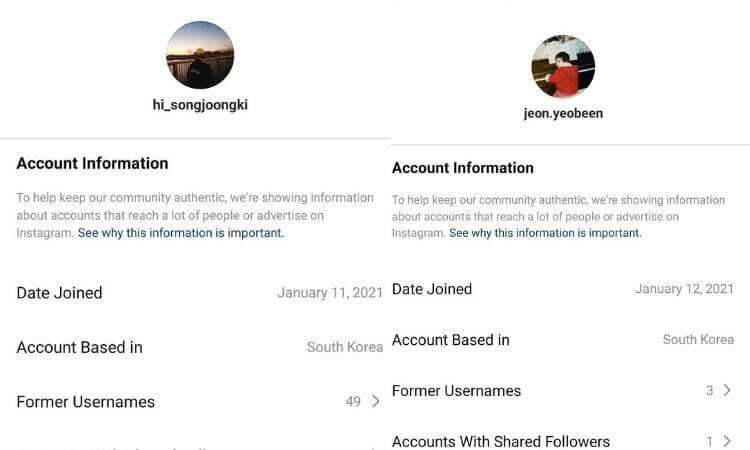 If we are going to detail all of the cute moments that happened behind the scenes of the drama, then we are going to be here all day. My personal favorites, though, are when Beenie teases Joong Ki by suggesting that he munch on a carrot, and the “magical” kissing moment in episode 20. I mean, on a serious note, I just can’t help but wonder (or rather, sing), “Is this real?”

It is impossible to dispute the fact that both of them appear to be *really* pleased when filming their sequences together, as the expressions on their faces clearly demonstrate. In point of fact, Joong Ki has stated that he loved playing a mafia consigliere and that he is content with his decision to play Vincenzo. The sentiments were mirrored by Beenie, who stated in an interview with Allure Korea that the drama is “like a miracle and a gift,” and that the cast members worked diligently while feeling excited about their job.

Song Joong Ki Gives His Prize To Our Beenie

Everyone, please join me in thanking Netflix! In this specific video clip, Joong Ki was the victor of a competition, and the prize for his victory was a camping chair. Do you have any idea what he did once he was given it? Uh, he just presented the gift to our Beenie, as far as I can see.

With regard to the games, please advance the video to 9:25 and observe how the players “communicate well” with one another:

If you’ve also observed, giving each other fist bumps isn’t something that’s exclusive to the CenCha culture. In addition to that, it’s A JEONKI THING!

I just wanted to make sure you were aware that our corn salad dispatched a coffee truck to the set of Beenie’s upcoming series, Glitch, to cheer her on. A fun fact is as follows: In a video for History D&C, Joong Ki stated that his preferred photography style is black and white. And just in case you haven’t been keeping up with Beenie’s Instagram stories, a good number of them have been done in those colors! The following is an example of a caption that she used: “Everyone on the Glitch squad was in an extremely good mood. Joong Ki sunbaenim, our very own Vincenzo Cassano, dispatched a coffee truck… a bingsu truck! You have my utmost gratitude “.

Song Joong Ki Admit he is Fond of Jeon Yeo-been

To wrap things up, here are some comments directly from Joong Ki that will serve as a reminder of why Beenie is such a likable person (according to her other co-stars) and how she exudes a positive vibe: “Because Hong Cha Young was such a likable character, the other actors’ feelings of disappointment are unavoidable and cannot be helped. While we were working together in the play, I found that she had a very endearing personality, and I couldn’t help but feel a connection to her.

Both Jeon Yeo Bin and the character Hong Cha Young has made a significant improvement in my estimation throughout the course of the drama.”