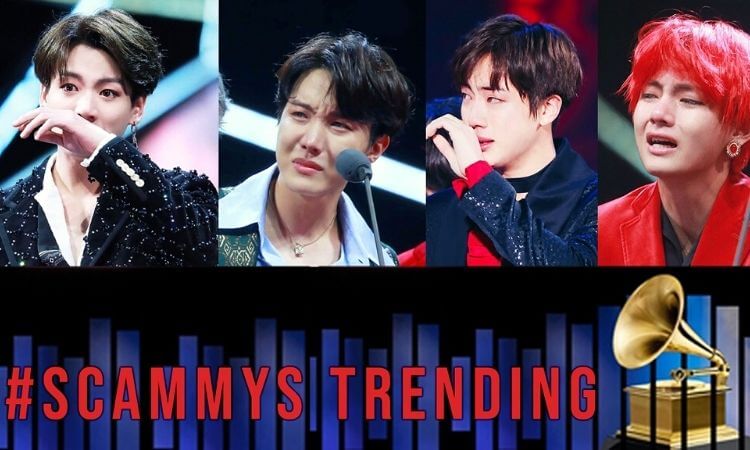 When we talk about fanbases, there’s none quite like BTS’ Army. They are Supportive and protective over Jin, Suga, J-Hope, RM, Jimin, V, and Jung Kook. The Grammys 2021 had already lost the confidence of the BTS Army before the official ceremony even began this evening. After the superstar group lost the award for Best Pop Duo/Group Performance for their song “Dynamite” to Lady Gaga and Ariana Grande’s “Rain on Me,” Army got #scammys trending on Twitter.

This was the BTS’ second Grammy nomination this year. But the first for their music A win tonight would have been a historic first for the global phenomenon.

The BTS Army poured onto social media with criticism for the Grammys after the K-pop stars lσst the award for Best Pop Duo/Group Performance to Lady Gaga and Ariana Grande, who won for their “Rain On Me” collaboration.

An Army supporter tweeted that: “Let’s not talk about Scammys anymore, they don’t deserve you. Please know that we love you to the moon and back. Let’s do what we always do, let’s be happy together. We are together forever bulletproof”.

Who said BTS lost grammys? It's grammys who lost BTS.

Last year, RM told Esquire that BTS would like to be nominated and possibly get an award. I think the Grammys are the last part, like the final part of the whole American journey. The first Korean Kpop to ever perform at the Grammys in 2020. BTS is set to perform again later last evening. The fans feel as though the Grammys are using them for ratings without awarding the band. “Bts doesn’t need the Grammys but the Grammys need BTS #scammys,” one supporter tweeted.

The Grammys 2021 have already been under fire this year for not nominating The Weeknd, whose 2020 album After Hours became the first since Drake’s Scorpion (2018) to spend four consecutive weeks at the top of the Billboard 200. He’s boycotting tonight’s award show along with Justin Bieber, who was frustrated that his album Changes was nominated in the pop category rather than R&B.

On the red carpet tonight, BTS addressed the Army directly following their loss: “We really want to see the Army now and I’m sure the Army is feeling the same emotions we’re feeling, so we’ll be back with even greater music, good performances, and even better music. So we’ll work hard for this next year as well and we’ll be back with great music and performances that you can look forward to.”