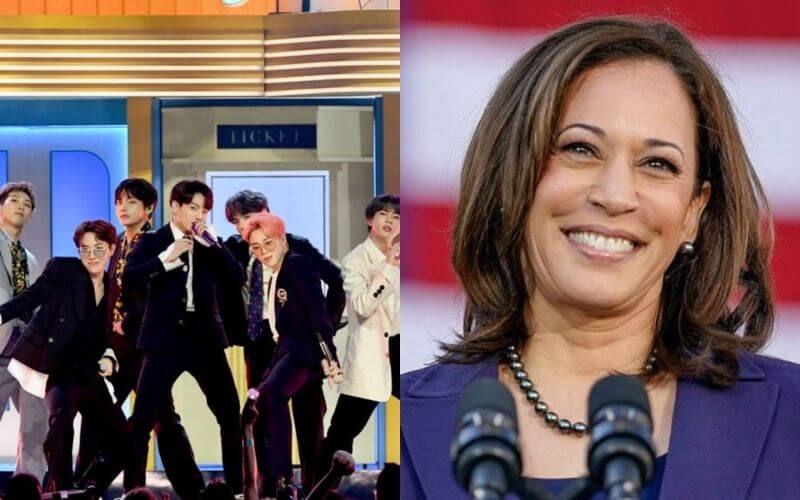 Vice President of the United State of America Kamala Harris is also a fan of BTS. BTS ARMY got excited after knowing that she is also an ARMY member. It is the first time in history that a black lady became vice president.

Although Kamala Harris has been very popular these days due to her achievements. But ARMY literally played an important role in this regard. They welcomed new members of BTS ARMY in their own way. Obviously, they are very excited and happy.

Many fans discussed this hot news on their social media. It’s not enough that some eagle-eyed fans find out about Kamal’s Spotify’s playlist featured BTS hit song Boy With Luv with Hasley. Many fans shared the screenshots with screaming on Twitter.

Check out a few comments and reactions of BTS fans

And she's a fan!!!!! Kamala Harris' Playlist got BTS' BWL on it!!!
Madam Vice President got excellent taste! pic.twitter.com/Bm5yXg2MeV

Yo yo yo @VP @KamalaHarris follows @BTS_twt I didn’t know I could fall deeper in love with her, but here I am pic.twitter.com/Y4fMwYy9Fr

The @VP follows @BTS_twt 😍🙌🏽💜 I love it! Kamala Harris has great taste pic.twitter.com/2qHMaf1rPz

I wonder which one of ya’ll is Madam Vice President Harris’ ARMY stan account…..#KamalaHarris 💜 @BTS_twt pic.twitter.com/E9qRJ8GbIE

It’s not my first time. The farmer President of the United Nation of America Barack Obama was also a great fan of K-pop music. Barack Obama’s daughters Malia Obama and Shasha Obama were also fans.